You are here: HomenextBuildingsnextBuildings and structures of historic interestnextThe Westminster Lodge Estate

Everyone in St Albans is familiar with the name of the Westminster Lodge estate (which never included the land occupied by the eponymous leisure centre at the bottom of Holywell Hill). But what about its history?

After the Romans had left the area, the land on the west side of St Stephens Hill did not get developed at all until the latter part of the 19th century, and the first people to take an interest were the Edwards family.

Henry Edwards was born in St Albans in 1803, presumably of farming stock, because he became tenant of the fine Great Hansteads farm at Bricket Wood, with a 16th century farmhouse which is still there and 287 acres of land. He employed nine labourers, and had an increasing family of sons to help with the farm. He also seems to have had significant financial resources, and was evidently keen to make his money, as well as his sons, work profitably.

In 1837 Holywell House had been demolished, in order to allow the turnpike down Holywell Hill to be straightened, and Henry Edwards purchased the remainder of the Holywell estate. Perhaps he was thinking of building himself a house there, but it did not happen, and within a few years he sold the land on to Daniel Foster, who owned the George Inn and much other local property. In 1844 Edwards was declared bankrupt, but he was not deterred. (He may even have planned it.)

Presumably the farm at Bricket Wood was still profitable, but he found an additional way of trying to make money. Together with his friend the solicitor Thomas Blagg, who had been St Albans Town Clerk since 1835, they got into the electoral bribery business, taking large fees from parliamentary candidates or their sponsors, and handing out hundreds of sovereigns to electors who agreed to vote for them. All this has been well reported elsewhere, particularly in David Dean’s recent lecture to the Society. The practice was eventually stopped by the Bribery Commission’s investigation and the disenfranchisement of St Albans.

During all this furore, Henry Edwards had apparently decided that the fourth of his six sons, born in 1839, whom he had curiously christened Isaac Newton, would be more use as a solicitor than as a farmer. So he was sent away to school at Christ’s Hospital, and became an articled clerk working for Thomas Blagg at his office in Chequer Street.

During the 1860s Henry Edwards married a second wife, as his first had died, and the family moved to a smaller farm at Beech Hyde, Redbourn, but one still requiring seven paid hands.

In 1863 Isaac qualified as an attorney and solicitor, and was operating as a partner in the firm of Blagg and Edwards. By 1865 he was married and living in a big house in Hatfield Road, one of the very few houses then in the whole of that road. They soon acquired four children and four servants. He was doing very well, and in 1867 Mr I N Edwards, as he was known officially, became Borough Treasurer, at a salary (part-time?) of £20. 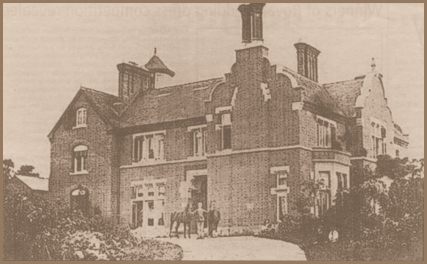 Westminster Lodge in the 1890s

It was time for Isaac to make another move, and it appears that he decided to build a new house on St Stephens Hill. About 8 acres of land were leased from the Gape family, and a large mansion appeared, in what might be called Victorian Tudor style. It had four reception rooms, a billiard room, a large hall, 13 bedrooms and two bathrooms. There was also an entrance lodge, with stables and a coach house, all of which still exist today. It was named Westminster Lodge, perhaps remembering the family’s parliamentary exploits. Henry Edwards died in 1874, and it is not certain how far he was involved with the new house, but his son lived there for the rest of his time in St Albans.

When Blagg died in 1875, Isaac moved up to become Town Clerk in his place. The salary was £100, plus £30 for legal expenses. He was not averse to a bit of wheeler-dealing himself. For example, he just happened to be the owner of some property at the top of Sweetbriar Lane which obstructed the junction with Chequer Street. So when road widening became essential in 1876, as solicitor he had to transfer the property from himself to the Town Clerk, for £700.

Apart from his professional work, Isaac had a great interest in dairy farming, and in improving the output of his large herd of pedigree Shorthorns, which won him awards and commendations from all over the country. The cattle were kept in various St Albans farms, and some no doubt grazed at Westminster Lodge. Also he demonstrated great skills in organising election campaigns for parliamentary candidates, having evidently learned from his father how not to do it. From 1868 he was election agent for no less than 27 candidates in London, Hertfordshire and elsewhere, all of whom won!

It seemed that he could do no wrong, but in 1888 he ran into a cashflow problem, as did farming generally. He had sold some client’s property for £3,500, but was taken to the High Court of Justice for failing to hand the money over when demanded. In March 1888 he was struck off the Roll of Solicitors, so he immediately resigned all his civic offices, and filed for bankruptcy. He thus lost his home at Westminster Lodge, his cattle and his livelihood – was it possibly one of his parliamentary enemies who was behind this? By July he was discharged from bankruptcy, with a surplus of about £10,000, and he moved with his family to a farm in North Mymms, where he died in 1900.

The next recorded occupant of the Lodge was Walter Edward Martin, a London fur merchant who was there by 1896, maybe earlier. He was a widower, born in 1852, and he lived there with his sister-in-law. Some time before the Great War, he disposed of his coach house, which was turned into a veterinary hospital, much as it is today. He became a JP, and died about 1939.

In 1940 the London printing firm of J Evershed & Co had been bombed out of their works at Bow, and moved to St Albans to join up with the local firm of Dangerfields. They acquired Westminster Lodge for their head office, and stayed there until new offices were built in 1955 on their works site off Inkerman Road (where Tesco have plans for a supermarket).

HQ of the Youth Hostel Association

Next, Westminster Lodge became the headquarters of the Youth Hostel Association, who renamed it Trevelyan House in memory of their founder President, Dr George Trevelyan, who was uncle of our member Sir Geoffrey Trevelyan. In 1963 62 new homes were built in the Lodge grounds, named Westminster Court. Finally, since the YHA moved to Matlock, there has been further development of private housing around the Lodge, in the area now known as Trevelyan Place. The Lodge itself has been divided into five units.

After the 1939-45 war, the area north of the Lodge remained unoccupied, apart from the prefabs of the Army Cadets, the Sea Scouts and later the Air Training Corps. They usually gave their address as the ‘Abbey Camp’.

Then in 1967, the City Council started to refer to this area as the ‘Westminster Lodge Estate’, even though it did not include any part of the Lodge as we have described it. The Abbey Theatre opened in 1968, and the Leisure Complex with its swimming pool in 1970, now all known as ‘Westminster Lodge’.

[Edited version of article by Brian Moody from Newsletter 168, May 2008]

An archaeological survey carried out in 2010 found that the site of the Westminster Lodge Leisure Centre had been developed before, by the Romans, as this extract from Newsletter 176 of May 2010 reports: ‘The main features found in the trenches include a Roman building, tentatively thought to be a mill, which appears to have been partially demolished in Roman or medieval periods, with the building materials quite possibly being reused in buildings such as the Abbey. In addition, a ditch has been found close by which could be interpreted as a ‘leat’, or artificial aqueduct dug into the ground, which could have fed the mill. Preliminary dating of these features is 2nd and 3rd century AD. Evidence suggests that the building may have had painted walls and a solid concrete floor. Other finds include prehistoric flints possibly dating from the late Mesolithic to early Neolithic periods, circa 4,000 BC, and late medieval pottery. These finds will be preserved in situ as they are in an area of the new development that will be soft landscaped, so there is no threat to them’.