You are here: HomenextBuildingsnextBuildings and structures of historic interestnextSt Albans Town Hall 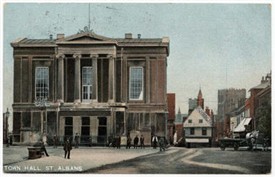 The Town Hall – A Brief History

Designed by George Smith and built in 1830, the Town Hall with its neoclassical style presented the inhabitants of St Albans with an edifice totally new to this country town.

The building is described in Pevsner’s Buildings of England as a “Giant portico of four fluted Ionic columns, placed on a plinth of full ground floor height with the main entrances between robust Tuscan pillars”.  The portico thus appears to stand too high as if it were on stilts.  To the east and west are large tripartite windows with straight lintels decorated with wreaths, all in the best Grecian taste!

In 1828 an agreement was reached whereby a combined Town Hall and Court House was built on the condition that the freehold remained with the Corporation.  This eventually was resolved with one third to the Corporation and two-thirds to the Magistrates. Later in the 19th century, when the County Council was set up, it took over the building with certain rights being retained by the Corporation.

While the Town Hall lacks the open lower floor of medieval town halls which incorporated market stalls, it maintains close links to the town’s famous market by virtue of its main entrance onto the market square enabling the stalls to reach directly into the building.