You are here: HomenextResearchnextResources and enquiriesnextRecords of the 1924 St Albans Housing Survey 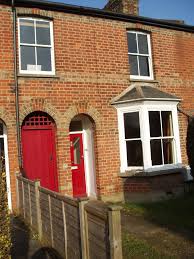 The promise of ‘homes fit for heroes’ was just what many soldiers wanted to hear as they returned to civilian life at the end of the First World War. However, various problems curbed any immediate wholesale improvement to the nation’s housing stock.

In 1924, concerned by the lack of local progress, the Bishop of St Albans initiated a survey of workers’ housing in the city to shine a light on the problem. The extensive records of the survey are in the St Albans City archive at HALS under references SBR/3580/1- 32. They consist of the report itself together with a completed form for each of the properties surveyed. The forms typically record details of ownership, sanitation and state of repair. They are bundled together in 24 surviving files each covering the street(s) in which the properties were located.

While the surveyors mostly concentrated on the city’s medieval core, they also assessed more recent developments, on Bernards Heath for example. This was for comparative purposes. There is an opportunity here for anyone with an interest in social history to review the importance of the survey. The archive will also attract researchers looking at the development of their own house or street.

Thanks to the labours of John Cox, the Society’s Publicity Officer, we have photocopies in our library of the report and over 250 of the survey forms from about ten of the street files. John also copied several articles from the Herts Advertiser. These record the publication of the report by the survey team, the response of the City Council and the fractious exchange of views between the two parties. Val Argue’s notes about housing in the city, originally prepared for the Home Front project, are also available.

To find out more about the survey, do pop into the Society’s Library or e-mail: library@stalbanshistory.org