In 1868 the Herts Advertiser published a short obituary of Emanuel Reeves.1 His importance, according to the newspaper, was that he was the last of the local coachmen who made a living in the pre-railway era on the busy St Albans to London route. The obituary provides us with a few details of his trade: his coach was known as the ‘Favourite’ which, unusually, followed the Edgware
Road into London rather than via Barnet. What set Reeves apart from his competitors was the trust his customers had in him as he was their carrier of choice for ‘bank and other parcels of money and securities’. On this admittedly slim evidence, Reeves appears to have been a successful operator.

Alan Bates’ Directory of Stage Coach Services 1836 records many routes running through St Albans shortly before the arrival of the railways, including several from London to Birmingham (each with distinctive names, such as ‘The Economist’, ‘The Greyhound’, ‘The Tally Ho’ and the ‘Independent Tally Ho’), as well as separate services from London to Daventry, Halifax, Leeds, Leicester, Liverpool, Luton, Manchester, Northampton, Shrewsbury, and Wellingborough.

Ruined by the railway

But when the London to Birmingham railway opened in 1838, his business just faded away. How could he compete when his coach took 2¾ hours to get to London while the trip via Watford railway station was an hour less?2

In discussions about the detrimental effects the railway had on St Albans, the fate of the inns and innkeepers is to the fore. What happened to the coachmen – there were five local men working the London route in 1837 and dozens of long-distance coaches passing through the town3 – has been largely forgotten.

A ‘begging letter’ sent by Reeves in 1842 to the Earl of Verulam puts their plight into context.4

My Lord, having been a resident in the town of St Albans for a considerable period, not unknown to your lordship I have taken this liberty of begging at your hands a favour, which by granting, you will be conferring a lasting obligation upon the family of your petitioner. I used to be the proprietor of the coach called the ‘Woolpack’ from St Albans to London which at one period gained me an excellent subsistence but thro’ the effects of the railroad I was compelled to abandon it. I am induced therefore, knowing your Lordship’s kindness, to apply to you, and if your Lordship knows of any situation or have one vacant in your own establishment by granting the same to me, at ever so trifling a salary, your petitioner would ever be bound in gratitude to you I am Your Lordship’s Most Obedient and Humble Servant Emanuel Reeves

A brief note on the reverse of Reeves’s letter records the earl’s reply: “The case of people broken by the railroad very hard but how am I to discover what would suit you? And difficulty of obtaining any place exceeding great.” It was a hard-nosed response but one that reflected the ‘difficulty’ of the time. Nationally the economy of the early 1840s was far from prosperous and local opportunities for someone with Reeves’s skills would indeed have been rare.

However, it may be that Verulam was able to provide the coachman with a helping hand. By the time of the 1851 census, Reeves was living with his wife, daughter and a servant on top of each other in one of the small apartments in the Marlborough Almshouses (then usually called the Marlborough Buildings) in Hatfield Road. 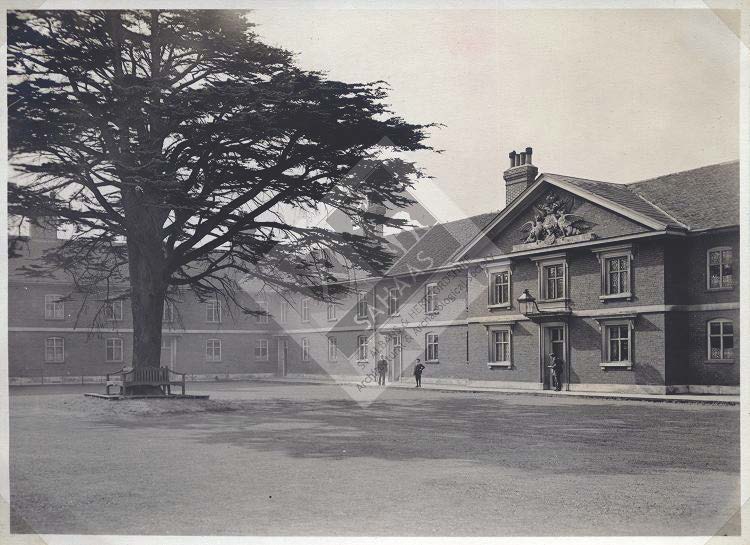 These were not for the destitute. The Qualifications for Admission dated February 1846 required applicants to have ‘£20 per annum secured for life’, good evidence that Reeves had put money aside. More pertinent to this story, Reeves’s admission must have been recommended by one of the trustees, another requirement of the Qualifications.5 Who these were in the 1840s is currently uncertain, but it is highly probable that Lord Verulam would have known them even if he had not been a trustee himself. It would be pleasing if Verulam did sponsor Reeves, a fact that close reading of the admissions register may confirm.6

[2] For these timings see the discussion of the letter sent in 1837 by Richard Gibbs to the directors of the London to Birmingham railway <http://www.hertfordshire-genealogy.co.uk/links/STAGECOACHES.htm> (accessed 4 June 2021).

[4] HALS, Gorhambury D/EV F593, Letter from Emanuel Reeves to Lord Verulam about loss of trade to the railway, 16 January 1842.

[5] British Library, Add Ms 78040, List of applications made to the trustees of Marlborough Buildings, St Albans by prospective in-mates; 1845-1867, with later additions.

[6] The first Earl of Verulam died late in 1845 so the second earl is the more likely candidate of the two.