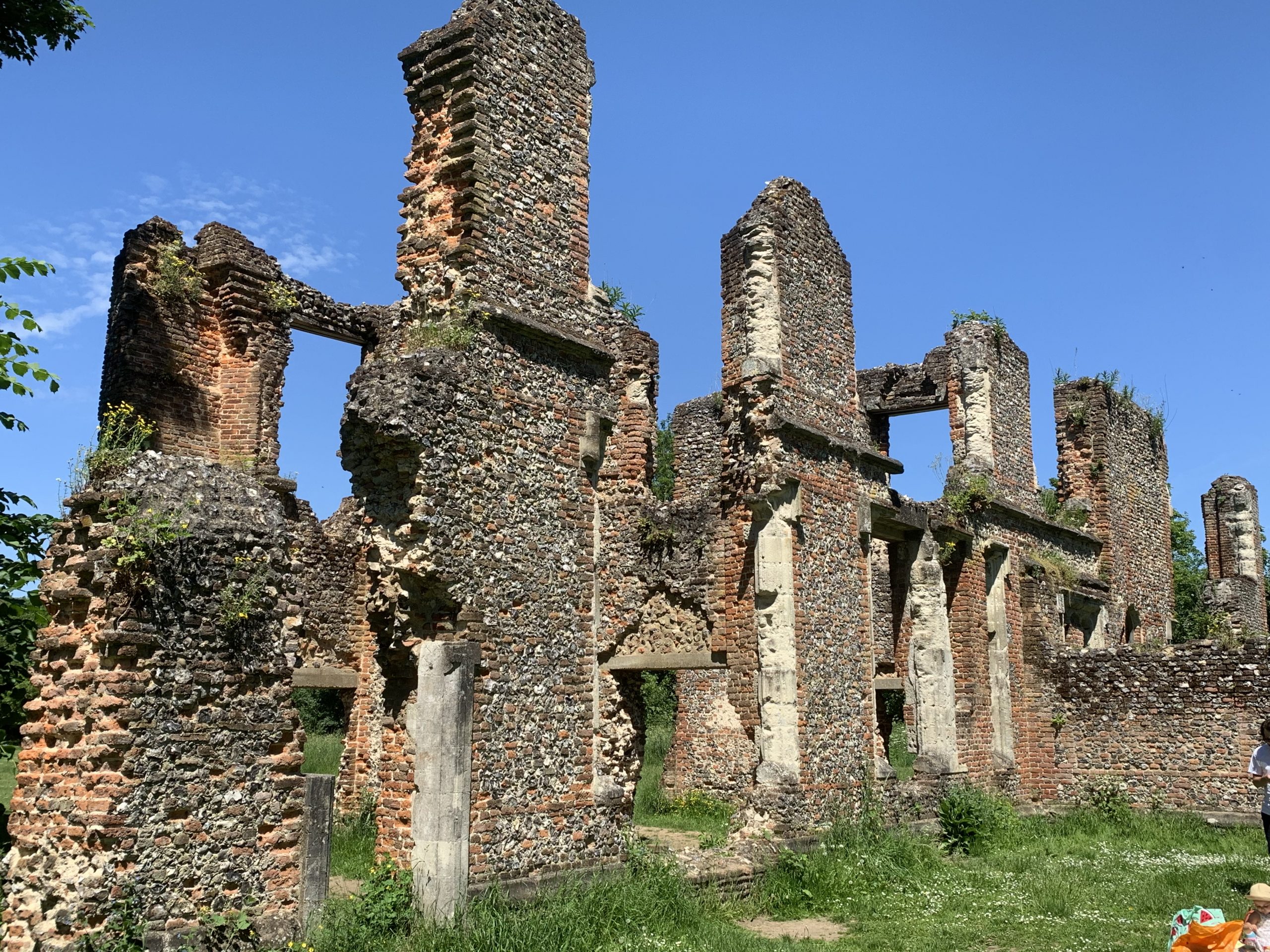 Just off Cottonmill Lane stand the remains of a building known variously as the Sopwell Nunnery, Sopwell House, or Sopwell ruins. Ruins they certainly are, but not of the nunnery, nor the precursor of the present Sopwell House about a mile away. Excavations carried out in the 1960s, the results of which were published by the Society in 2006, discovered more about how the site has been used over the last nine hundred years.

The establishment of Sopwell Priory

The monastic chronicler Matthew Paris reported that Sopwell Priory was founded by Geoffrey, sixteenth Abbot of St. Albans (1119-46), to house two holy women living in a rough shelter. [1]  While this story may not be correct, the Priory was probably established during his abbacy as a dependency of St Albans Abbey, in about 1140. It comprised a prioress and 12 nuns, and probably several servants. [2]

The modest size of the Priory is borne out by the small size of the apsidal church, believed by the archaeologists to date from the earliest period (just 3.5m across). Little else remains from this period. [3]

Sometime later, perhaps during the 14th century, this small chapel was replaced by a more substantial church (probably with a bell tower, given that four bells were documented at the Dissolution) accompanied by conventional priory buildings. These included a cloister, the prioress’ lodging and guest quarters. [4]

The nuns who inhabited the Sopwell Priory lived a strictly regulated life of religious worship, much like the monks of St Albans Abbey. But while monks living in the Abbey nominally had the right to elect their abbot (though the views of both the pope and the king carried considerable weight), the nuns enjoyed no such privilege. Their superior was appointed by the Abbot of St Albans.

Nothing daunted, when Prioress Philippa died in around 1330, the nuns discussed who they would like to succeed her, and a majority opted for Sister Alice de Hakeneye, rather than the Sub-Prioress, Alice de Pekesden.  The Abbot got wind of this, and sent his deputy, Prior Nicholas de Flamstede, to the priory, ostensibly to gauge the nuns’ opinions. In fact, the Abbot had already told him that he wanted Alice de Pekesden appointed, and this duly happened. [5]

The strictness of the regime under which the nuns were supposed to live is underlined by the rules promulgated by Abbot Michael following a visitation to the priory in 1338. These rules governed what the nuns did, when and where, and imposed strict controls on their contacts with people from the outside world. For example, nuns were not allowed to sleep outside the priory or see anyone inside their rooms without the Abbot’s special permission, and could only see secular persons in the parlour when fully veiled.

By the time of Abbot Thomas (1349-1396) and possibly earlier, there was also a male Warden or Master of Sopwell, though he was not allowed to enter the nunnery without the Abbot’s permission, and then only in the company of others, presumably to act as chaperones. [6]

The Dissolution of the monasteries took place over four years during the late 1530s, starting with the smaller and less financially secure establishments. In parallel with this, the remaining nunneries were also dissolved.

The impact of the Dissolution on St Albans must have been considerable, given the rôle played by the Abbey in town governance and the local economy. But Sopwell Priory was not nearly as significant.  In the years before it was closed down in the spring of 1537 [7], the convent had dwindled. At the Dissolution, it comprised just the Prioress Joan Pygot, five nuns, four servants and a priest.

Sopwell Priory was not a wealthy institution. At its dissolution, there were 36 Benedictine nunneries with greater incomes, and 34 with lesser incomes. Land and ancillary buildings aside, there was reckoned to be little of value in the priory, apart from the lead on the church roof (£40) and four bells (£18). The church was dismantled; the stone fabric was sold for £3, the timber in the choir for £2, and the fittings and furnishings for £1 15s 6d. [8]

The members of the convent were sent on their way, with a pension of £6 a year for Joan, and £10 5s 8d shared out amongst the rest. [9] What remained must have made a sorry sight – abandoned domestic and storage buildings, pits used to melt down the roof lead, untended gardens, and the ruts left by carts used to drag away the stone. As with other former priories, it is quite likely that the domestic accommodation and outbuildings were retained, as they had potential value to purchasers.

St Albans Abbey clung on until 1539, after which its outbuildings were sold off, and the Lady Chapel was sold to the outgoing abbot (Richard Boreman) for use as a grammar school. In the years that followed, iconoclasts smashed up the shrines of St Alban and St Amphibalus, whitewashed the wall paintings, and destroyed the high altar screen or reredos.

The military engineer who bought the Sopwell site

Many miles away, in Calais (then still a British possession), Richard Lee was making a name for himself as a military surveyor and engineer, where he was Surveyor of Works between 1536 and 1544. Despite his lowly origins (possibly as a master mason), he wooed Margaret, the daughter of Sir Richard Grenville, Marshal of Calais. The Marshal was not keen on the match, but Lee’s connections with Thomas Cromwell helped to overcome Grenville’s opposition. [10]

An ambitious man, Lee set about acquiring the trappings of a landed gentleman. He was already bailiff of the Priory’s lands, and on 13 December 1538, for a fee of £808 3s 4d, Richard Lee and his wife Margaret were granted:

the house and site of the dissolved Priory of Sopwell in the parish of St Peter in the town of St Albans, Herts., with land attached, to hold in as full a manner as Joan Pygot the late prioress. [11]

Lee also obtained the grounds and monastic buildings of St Albans Abbey (but not the Abbey itself) and the rectorship of St Stephens. The monastic buildings were demolished, and the stone sold off, though some may have been re-used in the construction of Lee’s house at Sopwell.

Some time in the 1550s, Lee was able to turn his attention to the design and construction of a suitable house on the site of the old priory.  According to the report of the archaeological excavation, ‘the new building retained many features of the medieval plan including the cloister/courtyard, and often reused the medieval footings for its walls … The nave of the church was rebuilt as a hall with a fireplace as a hall with a fireplace in its north wall’. [12] The cloisters and the garth it surrounded were replaced by a cobbled courtyard.

Lee had relatively little time to enjoy his new home.  In 1554, he took part in an expedition to Edinburgh (see box below), and in 1557, he began another busy period of employment – first with the army in the Netherlands as ‘trenchmaster’, then designing and overseeing the construction of the major defences around Berwick-upon-Tweed on the Scottish border. Then it was off to Kent where he worked on Upnor Castle.

During the so-called War of Rough Wooing, Richard Lee accompanied an English punitive expedition to Edinburgh in 1544. He returned to England with a knighthood and the Dunkeld Lectern, seized from Holyrood Abbey. Sir Richard Lee installed the brass lectern, in the form of an eagle with outstretched wings, in St Stephens church, St Albans. [13] In November 1984, the lectern was taken from the church by a group claiming to be the ‘Seeds of the Gael’. Followed a protracted Anglo-Scottish dialogue involving several institutions and individuals, St. Stephens accepted the offer of a Victorian replica of the lectern in 1995, which is now to be found in the church (see below). The original surfaced in Edinburgh in 1999, and was loaned by St. Stephens to the National Museum of Scotland, where it remains on display. [14] 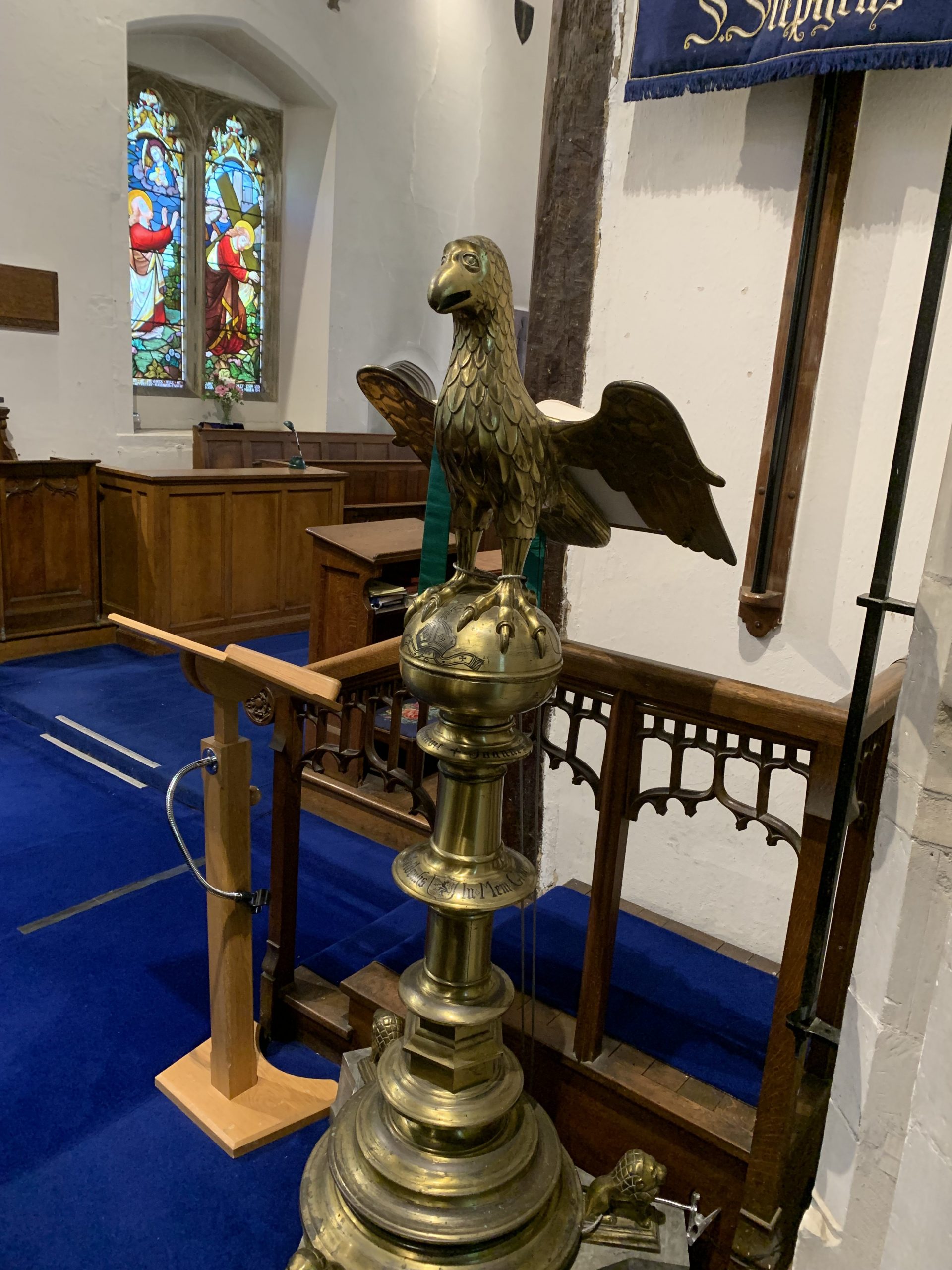 At some stage in the 1560s, Sir Richard evidently decided that a rather grander house was required. Archaeological evidence suggests that the plan was for an H-shaped house, with the great hall forming the cross bar, and western and eastern wings extending beyond the house around courtyards to the front and rear of the hall. Unusually, the plans allowed for corridors along the north and south sides of the hall. Given the need for the hall to be lit, one or both of these corridors may have been single storey, allowing windows to the hall to be installed above them.

At about the same time that work on the house was underway, Sir Richard extended and emparked the surrounding grounds. This was made possible by the relocation in 1562 of the London to St Albans road further to the north east, along the line of the present Sopwell Lane and Old London Road. 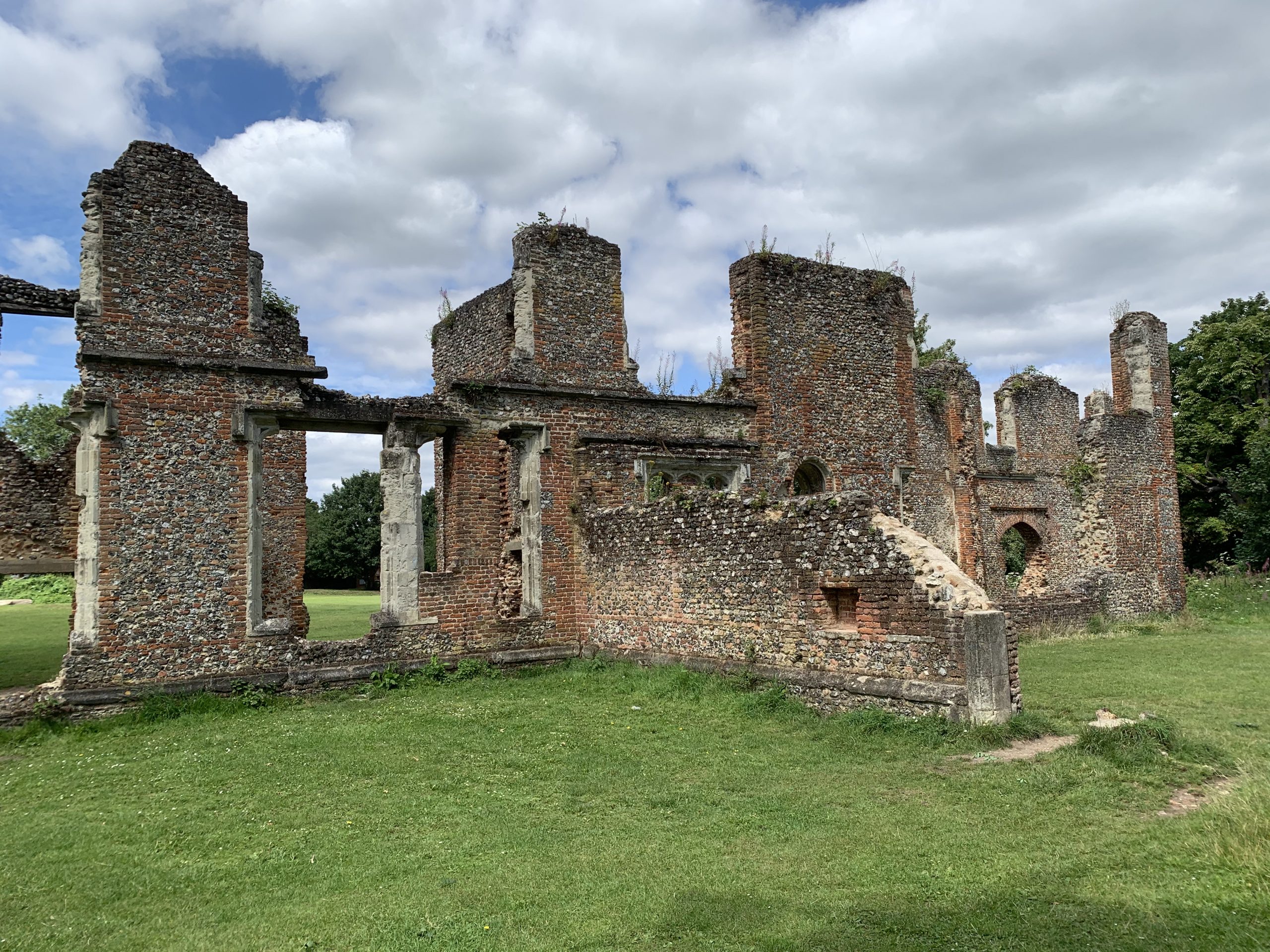 The remains of the second Lee house (SAHAAS)

In 1564, Elizabeth I stayed at Sir Richard’s house, making it likely that work on the second Lee House had advanced to the point that the queen could be accommodated satisfactorily. [15] However, the archaeological excavations suggest that although foundations for the H-shaped structure were begun, several parts of the building were not completed. In particular, it appears that the west wing was not completed, and the east wing was cut short.

It may be that Sir Richard’s death on 11 April 1575 altered the plans. He was buried in St Peter’s Church two weeks later. His funerary helmet has been conserved and can be seen at the St Albans Museum + Gallery.[16] 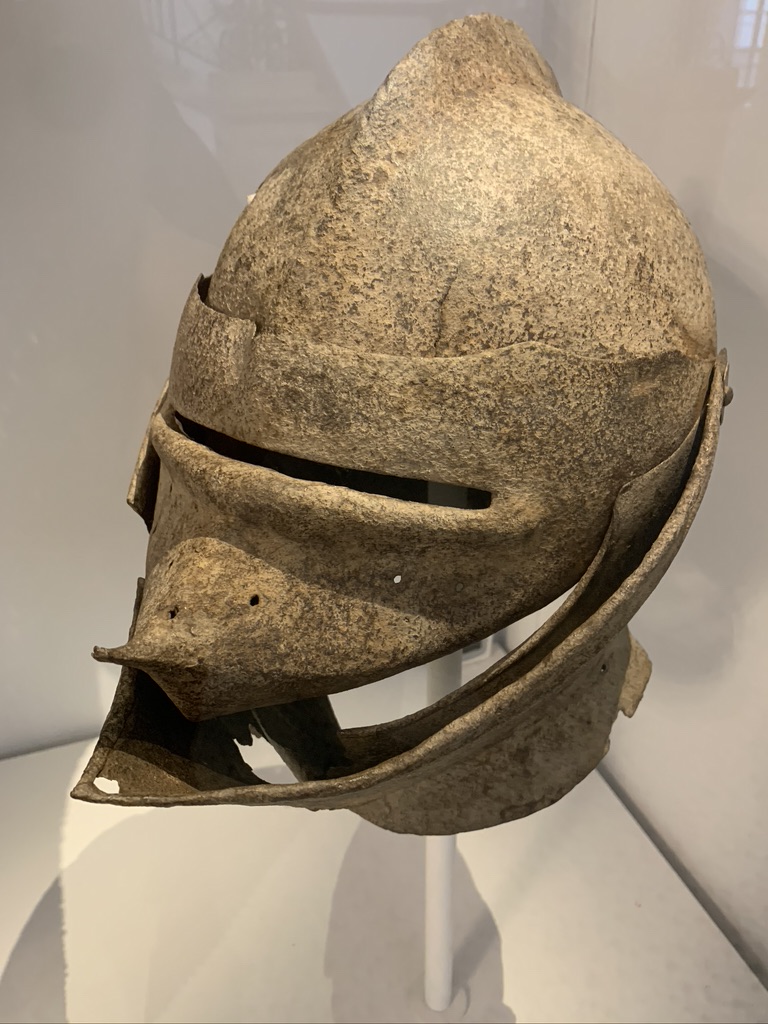 An estate plan made for Robert Sadleir (d. 1669) in about 1660 (see below) shows the house in a good state of repair, though the depiction omits the west and east wings that are on shown on the map by Benjamin Hare map of 1634. 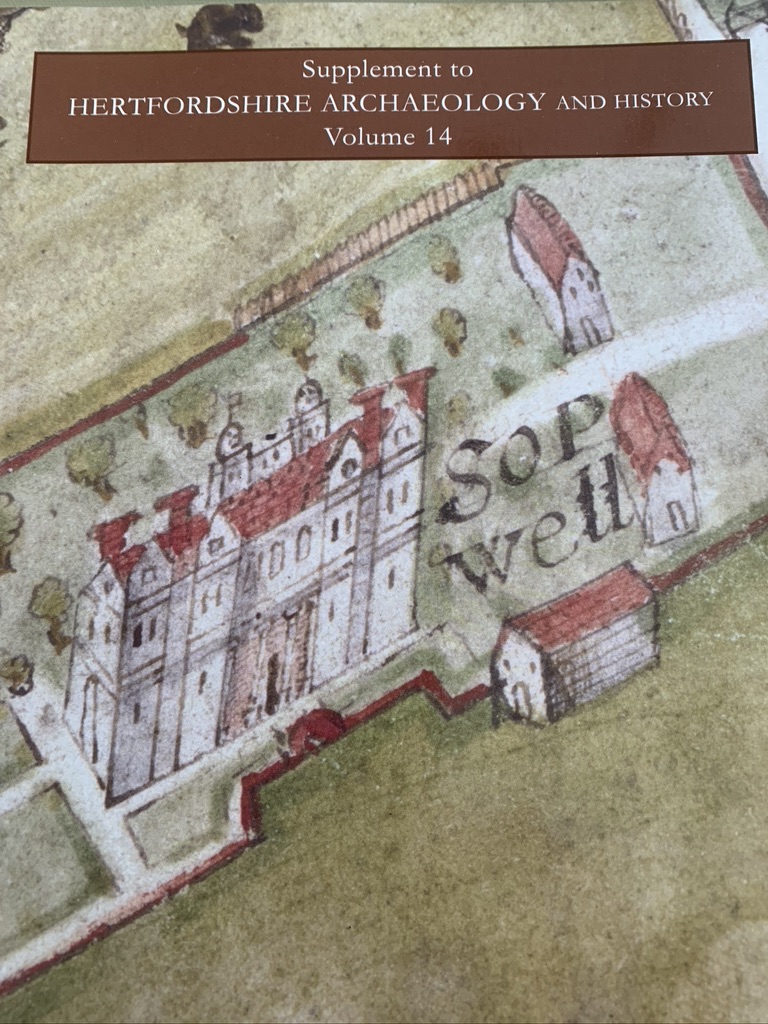 The Sopwell estate was sold to Sir Harbottle Grimston in 1669. Much of the house was pulled down, and some materials were reused at Gorhambury, Ashdown and (possibly) Salisbury Hall in Shenley parish, where roundels similar to those in the remaining structures at Sopwell were excavated in the 1960s. By the late 18th century, engravings showed ruins termed the ‘Sopwell Nunnery’ that were all that remained of Lee House. Eventually, the site became part of the Verulam Estates, in whose ownership it remained until 1964, when it was sold to St Albans City Council.

The excavation and its findings

Between 1962 and 1966, a team of archaeologists and volunteers carried out an excavation of part of the site. Mr O. J. Weaver was Co-Director of the investigation, except in 1966. Mr B. F. Rawlins acted as Site Supervisor in 1962; Mrs B. Tubbs supported the excavation in this capacity throughout the project. Mr P. E. Curnow gave expert advice on many aspects. Many other people provided assistance in various ways.

The primary objective of the project was to recover the plan of Sir Richard Lee’s house. The excavations found evidence of:

A report of the excavation was prepared by Mr E.A. Johnson in the 1970s, and subsequently edited and rewritten for publication by Carolyn Heighway and Richard Bryant of Past Historic in 2005. Their report was published in a supplement to Volume 14 of Hertfordshire Archaeology and History in 2006. A small number of copies are available for sale, and a copy can be found in the SAHAAS library.