You are here: HomenextSocial historynextPeople of St AlbansnextWalter Lawrance – the first Dean of St Albans 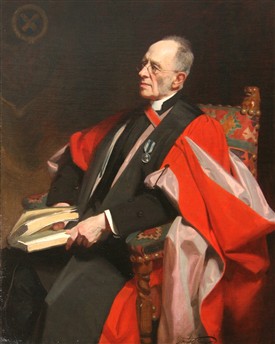 zoom
Portrait of Walter Lawrance by Frank Salisbury.
Reproduced courtesy of the Cathedral and Abbey Church of St Alban

Walter John Lawrance was born at The Grove, Kentish Town, in 1840, the son of Edward Lawrance, a solicitor. After St Paul’s School, Trinity College Cambridge, and a spell as a curate in Kent, he came to St Albans in 1868, at the age of 28, to be Rector of the Abbey parish, a post which he was to hold until his death in 1914.

To anyone interested in the development of the Abbey, its rise to Cathedral status, and its present important role in the life of the city, as a religious centre for all Christian faiths, and as a centre for music, education, and visitors, Lawrance is a pivotal figure.

He found a church in a semi-ruinous state, locked when not in use for services. Admission was by ticket only, obtainable from a local inn, at the fairly high price of 6d. Services were held under the tower, the nave was ruinous and had long been abandoned. The tower was heated by open braziers, with no artificial light. Lawrance had, he said, preached in the choir in 1869 with the thermometer below freezing, and an overcoat under his cassock!

Slowly things began to improve. George Gilbert Scott was engaged as architect, to strengthen the tower, and push straight the south wall of the nave. Lawrance’s battles with Lord Grimthorpe, the rich lawyer who took it upon himself to restore the church after Scott’s death are a saga in themselves for which there is no space here but the sorry state of the building was remedied, at some cost to the medieval fabric. In the words of Grimthorpe’s biographer, ‘the badness of St Albans was not only Grimthorpe’s. What sort of man he was… was thoroughly understood by his contemporaries… they wanted his money, and they got a revised Cathedral in exchange’.

In 1893, Lawrance’s twenty-fifth anniversary in St Albans, the growth of the congregation was noted in the local press. The number of Easter communicants had risen from 121 to 774 and eventually was to be over 1,000. There was daily morning and evening service and two services on a Sunday. There was no money for daily choral evensong but the music at Sunday services had ‘wonderfully improved, with a good organist and choir’. He said: ‘Nothing is of more importance than the provision of services filling the Cathedral.’

First Dean of the new Cathedral

He became the first Dean of the new Cathedral in 1900. As Archdeacon, he had fought to give the Non-conformists the religious teaching in schools which they desired. He spoke of opportunities lost by the Church of England ‘because she refused to relax the rigidity of her rules, and to adapt herself in any way to the interests of a people increasing in numbers, intelligence, and a desire for spiritual life and enlightenment from mother church’. Interesting and enlightened views from someone very much in the mainstream of the Anglican church of this period.

Lawrance had a strong interest in education. He was Chairman of Governors of St Albans School, and of the St Albans School of Music. His incumbency was said to be the most important since the Reformation, and it is not hard to see why. He cherished the dual role of the Cathedral, labouring on the one hand to improve the number and quality of the services, and on the other to involve the Cathedral with the community. He supported the foundation of St Albans High School for Girls in 1889, of which his daughters were early pupils. He was responsible too for the building of a boys school, and a youth institute for school leavers. He was chairman of the management committee of the St Albans and Mid-Herts Hospital and Dispensary.

The Abbey School log book recorded in 1914 ‘the death of our oldest manager Dean Walter Lawrance. He was a great favourite with the children and widely respected by the teachers. His kindness and help here will be much missed’. In the words of the Mayor, ‘the Dean’s genial companionship and friendship made everyone love him’. It was said of Lawrance as it cannot be said of many ‘here was a man who made the joys and sorrows of the people of St Albans his own concern’.

If you are interested in finding out more about the life of this remarkable man see ‘Lord Grimthorpe and Other Dragons’ by Gillian Harvey which is available from the Abbey bookshop at £3.75.

This article was originally published in February 2013 in the Herts Advertiser newspaper in a series of articles contributed by SAHAAS members. We are grateful to the newspaper’s editor for his permission to republish the article here.

The article below, entitled ‘Walter J. Lawrance: First Dean of St Albans’ provides further detail on his life and the Victorian restoration of the Cathedral.