You are here: HomenextSocial historynextWar and Conflict: their impact on St AlbansnextThe Home Front in St Albans during the First World WarnextAn industrious little city on the cusp of war

An industrious little city on the cusp of war 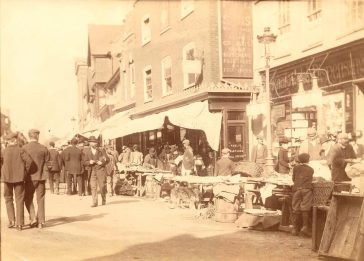 St Albans in 1914 was a prosperous cathedral city with a diverse economy. The population of the borough, according to the census of 1911, was just over 18,000, with many more living in developing residential areas outside the city boundaries. Along with the established straw hat making factories and the silk mills, a range of light industry had come to the city in recent years, most notably printing and clothing manufacture. There was also a growing commuter population.

As a result of recent research by the St Albans and Hertfordshire Architectural and Archaeological Society, a lot more is now known about the people of the city in the years immediately prior to and during the war years. The whole of the 1911 Census for St Albans has been transcribed by the Society, providing an unrivalled picture of the lives of the inhabitants at that time.

For example, the largest industries were hat making, with more than 900 employees, followed by printing, clothing manufacture, boots and shoes and silk making. There were also well over 100 people employed in a factory producing brushes. Larger than all these sectors, however, was building: this rapidly growing city, with new industries and new housing estates, found employment for nearly 1,000 construction workers in 1911.

Women outnumbered men in the borough of St Albans. This had long been the case, because of the importance of straw-plaiting industry in the nineteenth century. By 1914 the plaiting trade had declined, but there were still many straw hat-making factories employing a large female workforce.

Another reason for the predominance of women in the population was domestic service. There were nearly 1,500 domestic servants in St Albans in 1911, the largest single occupational group in the city, almost all of them young women. In total, there were only 81 men for every 100 women in the city – compared to 94 for every 100 in the country as a whole. This would change rapidly when the war started, as many thousands of soldiers were billeted in St Albans.

Public health had improved considerably in the lifetimes of those who lived in the city in 1914. The water supply had been improved in the 1860s and 1880s, and there were new public baths and sewage works in the 1880s. However, sanitation remained poor, particularly in the new residential areas, such as Sandridge New Town to the north and Fleetville to the east. One letter-writer to the Herts Advertiser had recently complained of the ‘solid stink’ that rose from the rubbish heaps at Bernards Heath.

In 1913, a controversial extension of the municipal boundaries had taken place, bringing a number of areas under the governance of St Albans City Council, most notably the developing industrial and commercial zones of Fleetville and The Camp. This further swelled the population of the city, but upset many of the ratepayers in these outlying areas, who were now forced to pay the higher costs of being residents of St Albans.

The city was confident in its past and its future. Like many other towns and cities across Britain in the Edwardian years, St Albans had staged a popular historical pageant in 1907, showcasing its important role at great moments in national history. This was also an opportune moment for local industries to promote themselves to a wider audience. There was a growing interest in St Albans as a tourist destination: visitors were coming from as far away as the United States. The residents of the city had the use of Clarence Park from 1894, and, most recently, a new Carnegie-funded library in 1911.

The outbreak of war in 1914 brought many significant and rapid changes to St Albans, as it did everywhere else. There were few areas of life that the war did not touch.

Mark Freeman is a senior lecturer at the Institute of Education, University of London. He is the author of many books and articles on modern British social, educational and business history, including St Albans: A History (2008). Please visit www.markfreeman.org.uk for further details about Mark’s work.

This article was originally published in July 2014 in the Herts Advertiser newspaper in a series of articles contributed by members of the SAHAAS Home Front research group. We are grateful to the newspaper’s editor for his permission to republish it here.