You are here: HomenextSocial historynextWar and Conflict: their impact on St AlbansnextThe Home Front in St Albans during the First World WarnextHerbert White of the Beds Regiment

Herbert White of the Beds Regiment 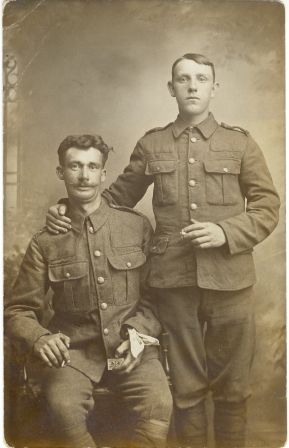 Herbert White was born in Welclose Street, St Albans, in 1893 and was one of eight siblings. Like many others in the area, his family was poor. He was often in trouble with the police, a string of offences in his mid-teens culminating in a month’s hard labour in St Albans Prison in Grimston Road. Six strokes of the birch were an added punishment. His parents had given up on him, describing their son as ‘practically incorrigible’.

In 1914 Herbert enlisted, joining the Bedfordshire Regiment. Perhaps this was the making of him as he was rarely again in trouble with the police. However, in light of what had gone before, it comes as a surprise to find the following poem in the Herts Advertiser in June 1915 attributed to Herbert. He sent it from France to his father who probably forwarded it to the newspaper.

“While I lie in the trenches and the battle rages hot
My thoughts are of dear old home, the ivy-covered door;
And I picture you, dear father, as the days go slowly by
Waiting, waiting nobly, while the tear-drops dim your eye.
I saw again in dreams, Dad, the place I used to roam,
And wonder if I’ll live to see again the dear old home.
Do not fret or pine for me, though sorrow fill your heart,
For your sweet influence lives, and I must do my part.
The harder task by far is your lot to bear,
But cheer up, brighter days shall dawn.”

With thanks to Steve Peters, great-nephew of Herbert White and a member of SAHAAS, for these details and also for the use of the photograph. A short biography of Herbert written by Steve is available in the Society’s Library.