The Production of Watercress around St Albans during World War One 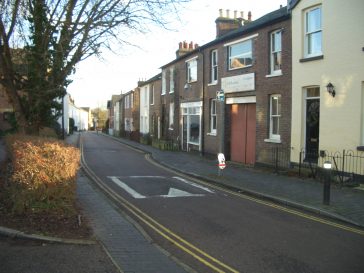 The tragedy of Thomas Partridge

Thomas Partridge was a watercress grower and farmer who lived with his widowed mother and sister at 56 Albert Street, St Albans (pictured).

He had taken over the family business in 1907 when his father, also called Thomas, was tragically killed in an accident at Boxmoor, near Hemel Hempstead. It is clear that following this tragedy, which young Thomas Partridge witnessed, he shouldered the responsibility of continuing the family business. Nine years later, we find him appearing before the St Albans Tribunal (March 1916), pleading exemption from conscription on the grounds of hardship. At the hearing he stated that if called up he would be ruined in his business and that his dependents would be heavy losers.

At that time he had watercress beds at Redbourn and Springwell, near Rickmansworth. His appeal was successful. He appeared before the tribunal again in August 1916, February 1917, August 1917 and March 1918 when he was given a further six months’ exemption and urged by the mayor (chairman of the tribunal) to “grow all the stuff you can.”

In his appeal in February 1917, Partridge stated that he had about two acres of watercress in addition to his market garden and farmland. Before the war he employed eight to ten men but now only had the assistance of three, mainly older men.

During this period he also appeared before the tribunal on behalf of two of his employees, George Lee, 32, a watercress man based at Springwell, and William Lewis, 46, a labourer.

Lee had served 13 years in the RFA [Royal Field Artillery], including a year in France. He was discharged time-expired in August 1915 and subsequently married a widow with one child, one of Thomas Partridge’s sisters.

Lee’s case was referred to the County Appeals Tribunal where he was given exemption on the grounds of his military record.

At the earlier St Albans tribunal hearing, Partridge had tried to make a case for exemption claiming that the work Lee did was of national importance but this notion was ridiculed by two members of the tribunal, as reported in the Herts Advertiser on 29 July 1916. In trying to make his case, Partridge stated that “watercress was largely consumed by the Army”, a remark met by laughter. Mr Keech then asked: “Does he supply watercress to the men at the front?”  To which Mr Beal retorted: “No, they grow it in the trenches,” – a quip that was greeted with more laughter.

Nonetheless, watercress was a staple during the war period when watercress sandwiches at high tea became almost a national institution (source: http://www.watercress.co.uk/).

When the case of employee William Lewis, a married man of Hart Road, came before the St Albans Tribunal in July 1918, Partridge made no claims about the national importance of watercress. Instead, Lewis’s appeal was referred to the War Agricultural Executive Committee.

After the war Thomas Partridge did not live long enough to enjoy the fruits of his labours. He was killed aged 42 on 31 August 1928, kicked in the chest by a horse that had unseated him. The accident happened at Old Sopwell Mill.

At the inquest, a watch found in the left-hand pocket of his waistcoat was handed to the coroner Mr Ottaway. The glass face was broken and the watch had stopped at 10.21am.

A verdict of death by misadventure was recorded.