You are here: HomenextSocial historynextWar and Conflict: their impact on St AlbansnextThe Home Front in St Albans during the First World WarnextObliging His Majesty 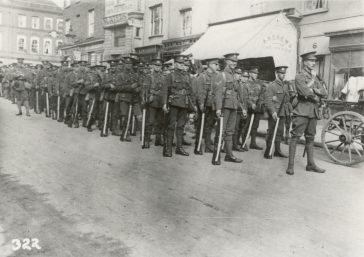 When the call came, hundreds of men in St Albans and other local towns were ready and willing to fight for king and country as members of the Territorial Force. St Albans-based historian Alan Wakefield, from the Imperial War Museum, explains how they were formed and where they fought in the First World War.

The poor performance of the British Army in the Boer War (1899-1902) led to a series of wide ranging reforms instigated by Secretary of State for War, Richard Haldane. As part of the shake-up Haldane undertook a complete reorganisation of volunteer forces, just six years before the outbreak of the First World War.

Historically, Britain had relied on the Royal Navy and a small professional army for defence. However, in times of international crisis the army was often overstretched and for home defence the country looked to volunteers drawn from the civilian population.

The Territorial Force (TF) was just one manifestation of this tradition. Many TF units traced their origins back to the Napoleonic Wars or the late 1850s when France again threatened to invade.

Haldane aimed to establish a force of 300,000 men, organised and equipped along similar lines to the regular army. This home defence force included infantry, cavalry, artillery and support units such as engineers, transport and medical services raised across the country at county level.

Existing volunteer infantry battalions and yeomanry regiments were incorporated into the TF but most artillery and support units had to be raised from scratch. Individual volunteers agreed to serve for between one and four years, with the potential to extend their service for another four years. Once enrolled, a territorial had to attend regular evening and weekend drill and at least eight days of the 15-day summer camp.

As British strategy increasingly focused on sending an expeditionary force to the continent in the event of a major European war, the key task of the TF was to replace the regular army as the nation’s main home defence force.

Although Haldane’s reforms were hotly debated in parliament, the Territorial and Reserve Forces Act came into effect on 1 April 1908. In advance of this, county associations formed to organise and administer local TF units. In Hertfordshire the association met under the presidency of the Lord Lieutenant, The Earl of Clarendon. Amongst its members were senior TF officers, the chair and vice-chair of the County Council and representatives of both employers and employees.

In St Albans the TF took over the Drill Hall in Hatfield Road and Yeomanry HQ on Prospect Road. By 1910, ‘C’ Squadron had established its own HQ in Ramsbury Road and a Riding School and Gun Park was built for the artillery and ammunition column along the Harpenden Road.

Musketry practice for St Albans-based territorials mainly took place on a rifle range at Sandridge and the Hertfordshire County Association sponsored shooting competitions run by the local rifle association to give their men additional practice.  Membership of the TF also gave men plenty of chances to engage in sports and social activities such as dances and formal dinners.

Although the TF were relatively well equipped in terms of uniforms, weapons and equipment, access to horses was a different matter. As part-time soldiers the territorials were largely reliant on hiring horses for riding and transport purposes. Even the yeomanry, traditionally drawn from rural communities, required increasing numbers of hired horses as many new recruits came from towns and had little knowledge of horsemanship let alone their own mounts. To assist matters the country association purchased 18 horses for the artillery, of which 11 were on loan to local farmers and tradesmen in and around St Albans when not required by the TF.

As Britain headed to war in August 1914 the TF was mobilised. Following War Office home defence plans, the St Albans-based territorials moved to Essex and East Anglia to help defend against a possible German invasion. They were quickly replaced in the city by TF units of the 2nd London Division, which had St Albans as its war station.

With reinforcements needed in France the War Office looked to the TF. Men were asked to sign an Imperial Service Obligation that would allow them to be sent overseas. The majority of Hertfordshire’s territorials did so. They ended up serving on the Western Front, at Gallipoli and across the Middle East in a war very unlike that which they could have envisaged when joining the TF in the days of peace.

This article was originally published in September 2014 in the Herts Advertiser newspaper in a series of articles contributed by members of the SAHAAS Home Front research group. We are grateful to the newspaper’s editor for his permission to republish it here.

Alan Wakefield was, when this article was originally published, Section head – photographs’ at the Imperial War Museum, responsible for the curatorial team managing the museum’s extensive photographic archive. He is the co-author of Under the Devil’s Eye: Britain’s Forgotten Army at Salonika 1915-1918 and author of Christmas in the Trenches 1914-1918 and Plough and Scatter: The Diary-journal of a First World War Gunner.